Press enter to begin your search

The History of Dhamma Schools and their Development …

With the Dharma-dana activities of King Dutugemunu, the preaching of the dhamma in the temples on the four Poya days came to be started. People would arrive in the temples on Poya days, sweep and clean up the premises, pay homage to the Buddha, Dhamma and the Sangha, and listen to the preaching of the dhamma. Under the guidance of the monks, the people would discuss ways and means of developing their settlements, village or town, and through joint activities of srama-dana had various activities done. The temple thus became the centre of such activities and herein one witnesses the unity and the growth of the land.

As a result of this very healthy movement which spread throughout the country, advancement in terms of economic, educational, health and cultural development of the land became a reality. Consequently Sri Lanka came to be known to the world as the island of Justice or Dharma-dvipa and the Granary of the East [Peradiga Dhanyagaraya]. But by the end of the Anuradhapura and Polonnaruwa periods, due to errors of our own rulers, the land steadily fell into a state of decline.

Very much later, three foreign powers invaded our land. During the period of Dutch rule, the temple which was the centre of all activity in the village was robbed of its power by taking away its educational activities and vesting them with the missionaries. The institution of Sunday as an official holiday and the abolition of the poya holiday system which had existed for 2078 years, stood in the way of observing the poya as a holy day. There were infinite obstructions inflicted on the Buddhists. Buddhist Children at the time had their education in Christian and Catholic Schools.

In the latter half of the eighteen sixties, the Chief High Priest Dodanduwe Piyaratana and the High Priest Koratota Sobita started seven Buddhist Schools. As a result of the spirit of Buddhist revival generated by the arrival of Colonel H. S.Olcott in Sri Lanka in 1880, the Buddhist Theosophical Society was set up and Buddhist schools were started. The first Dhamma School was set up by Colonel Olcott himself at the Vijayananda Pirivena in Galle. The first Buddhist school was Ananda College. In 1886 Mr. C. W. Leadbeater was appointed as its first Principal. On November 1, 1886 he established the first Sunday school to teach Buddhism to school teachers. These Sunday Schools were also used for the benefit of children.

As a result of this revivalist movement, two institutions namely the Sri Lanka Sunday School Organization and the Colombo Young Men’s Buddhist Association sprang up. Both had similar aims and aspirations, to increase and improve the knowledge of Buddhism of the Buddhists, to have discussions on Buddhism, to model people’s lives on Buddhist principles. As the Y.M.B.A. grew in strength, programming of Sunday school activities devolved on it.

On December 20, 1919 a joint conference of Buddhist Associations in Sri Lanka was held at Ananda College under the chairmanship of Sir D. B. Jayatilaka. Two major resolutions were passed at this meeting:

The first Dhamma Examination was held in 1920. Twenty seven Dhamm Schools sent up 374 students. Encouraged by the success of this first venture, the Y.M.B.A. resolved to hold annual examinations. At the request of Attorney Charles Dias and Mrs. D. P. Wijewardhana an examination for teachers in Buddha Dhamma was started in 1926. In the first instance 12 teachers appeared.

The Dhamma School system which was gradually developing reached its peak as a result of the Buddha Jayanti reawakening. In 1957, while 1,72,349 students appeared for the Dhamma examination, 1685 appeared for the Buddhist Teachers Examination. At this time a student could continue to be in the Dhamma School until the age of 23 years and remain in each class for two years. There were about four or five books prescribed for each class. A complete study of the Abhidhammattha Sangaha was required.

At the annual session of the All Ceylon Buddhist Congress held in Kegalla on 27 December 1953, the president Professor Gunapala Malalasekera gave an undertaking to have a Buddhist Commission of Inquiry appointed. On this a Commission was appointed on 2nd April 1954. I also was a member of that Commission. Its members, both monks and laymen, travelled all over the country and collected evidence. A common complaint everywhere was that dhamma examinations were help throughout the island, it was difficult to find teachers outside the main cities who could teach the Dhamma, let alone Abhidhamma which were an integral part of the examination syllabus.

During the first half of 1956, the report of the Buddhist Commission of inquiry came out. Mr. S. W. R. D. Bandaranaike who accepted the report came to power. On 4th March 1957 the Buddha Sasana Commission was appointed. I was appointed a member of that Commission too. On 13th July, the Dhamma School Examinations Syndicate was set up. I was made its chairman. The other members were Venerable Bambarande Siri Sivali Maha Thero, Mudaliyar Isaac De Mel, Messrs. D. S. E. Panagoda, D. S. Abeysinghe and Sirisoma Jayasinghe [Secretary].

The Buddha Sasana Commission travelled everywhere, except North, and collected evidence. The Dhamma School Syndicate too, travelled everywhere except North, and collecting evidence produced its report. In it, a detailed study of the Abhidhammatthasangaha was specified for the Dhamma Teachers Examination and introductory lessons on Abhidhamma were recommended for the general students. Since students opted to remain two years in the same class, text books were designed on the basis of two for each class. For those below standard five, more Jataka stories, biographies, Buddhist poetry and moral instructions were added.

As the new set of text books became popular with the students, teachers and the parents, the number of students in Dhamma schools rapidly increased. By the end of ten years, the number of students which stood at 1,72,349 at the beginning raised up to nine hundred thousand. Alleging that these text books were too simple, Abhidhamma studies came to be added to the syllabus. Since students and parents liked the school curricula more, attendance at Dhamma schools gradually dropped to six hundred thousand.

While Mr. T. B. Tennakoon was the minister of cultural affairs, a Committee was appointed under my chairmanship. Other members of the committee were Venerables Professor Hevanpola Ratanasara, Henegoda Kalyanadhamma, Rotumbe Upali, Vehara Saranankara and Prof. U. D. Jayasekera and Anagarika Dharmasena Ariyatilaka.

Provision of private tuition has become customary today on the assumption that teaching and learning at general school level is inadequate. In such a context, if the work–load at the Dhamma school becomes excessive, the choice of rejection would naturally be the Dhamma school. What is needed is to get our children to the temple at least once a week. The best way to achieve this is via the Dhamma School. Therefore what we have agreed upon is to prepare lessons which a teacher could put across during the school hours.

The new text books have thirty lessons each. One of these could be taught in the school itself, perhaps within an hour or one and a half. The rest of the time is for the character formation of the child, value inculcation and introduction to biographical studies with lofty aspirations.

We have advised for the preparation of the new text books on these lines. There could still be many shortcomings. These should be brought to the notice of the authorities and arrangements made for their correction. However, on account of this revised text-books and the increase of population in the land, the Dhamma school attendance which stood at six lacks has gone up to thirteen.

Buddhist education primarily aims at enhancement of culture. The culture content of the school curriculum is the mere teaching of religion as a subject. This does not suffice.

The number of school going children is about four million. Of these about two million six hundred thousand are Buddhists. But only one million three hundred thousand attend dhamma schools. We must endeavour to get this other half too to attend. Our primary aim should be to develop our younger generation on the basis of these five guide lines. 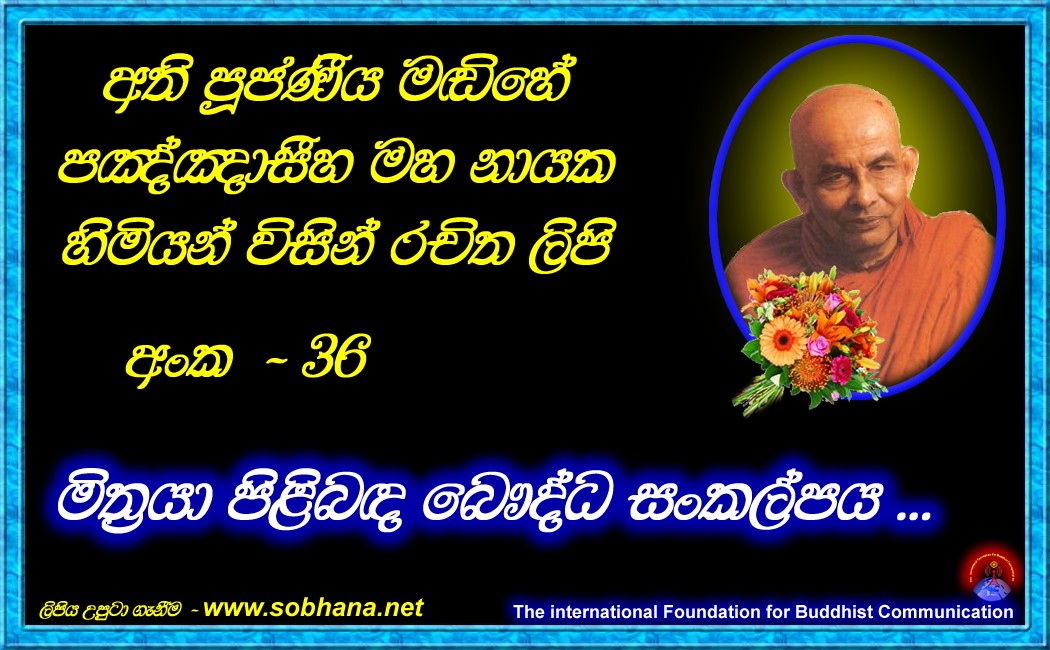