Bandaranaike and the Buddhists … 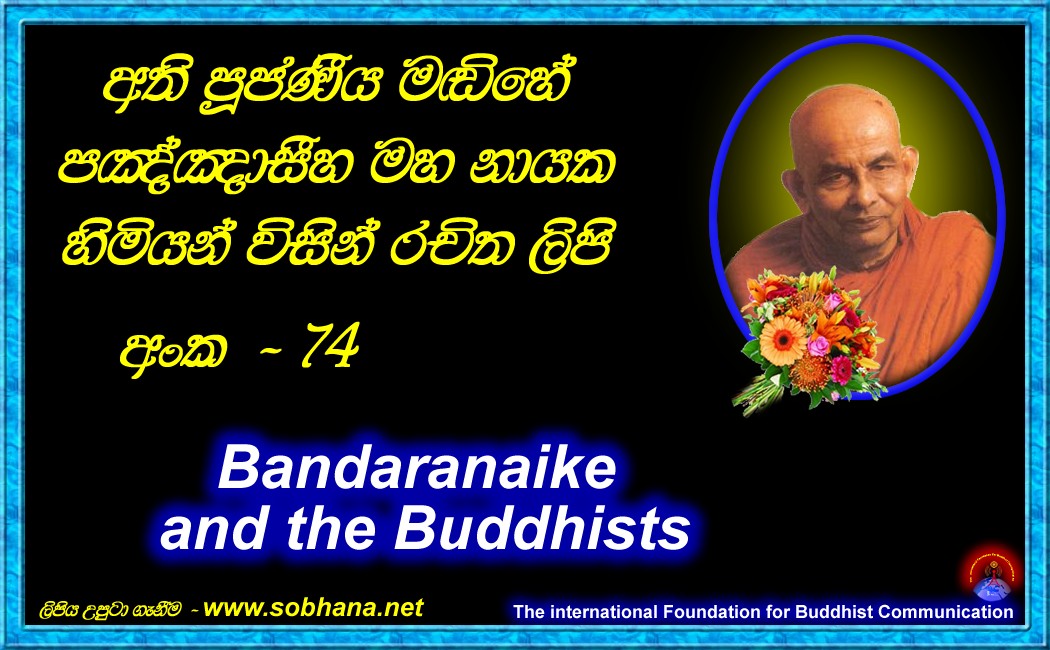 The world’s first university was Nalanda in India. It was begun in the third century and gained university status in the fifth century. There were five such universities in India.

The first university in Europe was Bologna in Italy. The second was Sorbonne. Oxford and Cambridge universities in England were the third and forth respectively. After his return from Oxford, Mr Bandaranaike went into politics giving pride of place to the Sinhala dress, Sinhala language and Buddhism.

He began meeting well known personalities in the country, both laity and clergy. He came to see our reverend teacher Venerable Pelene Siri Vajiranana Maha Nayaka Thera dressed in a simple cloth and banian. In the course of a long conversation he mentioned that he was entering politics.

By then Sri Lanka had got independence and Mr. Bandaranaike had been appointed Minister of Local Government in the new government. His main task was the establishment of the Anuradhapura New Town. He did this task in a magnificent manner. The result was the transformation of the sacred area as a sacred city.

When the all Ceylon Buddhist Congress appointed a committee to look into the grievances of the Buddhist public, I was also a member of that committee. After an extensive survey, the reported was presented to the Maha Sanga on February 4, 1956 at Ananda College, there upon Mr. S. W. R. D. Bandaranaike pledge to implement the recommendations of the committee. He won the General Election that was held a few months later.

In 1953 Mr. Dudley Senanayake invited a few of us to his residence to draw up a plan to save the country from disaster as a result of the alcohol menace. Venerable Kalukondayave Pannasekhara Maha Nayaka Thera and myself represented the Maha Sangha. Mr. Bandaranaike was among the lay representatives. The Temperance Movement was formed and a meaningful programme was launched.

After becoming Prime Minister, having won the 1956 General Election, Mr. Bandaranaike’s first task was to close the liquor bar in Parliament.

After the cabinet was formed and the new government started functioning, Prime Minister Bandaranaike met the Maha Nayaka to get their blessings. He had a problem in meeting the Maha Nayaka Theras of the Amarapura Naikaya since there were many representing the various sects. Since he had known each other having worked closely in the temperance movement, he wrote to me asking me to arrange a meeting of the Maha Nayaka Theras at the Vajiraramaya on a given date, which I did most willingly.

At that meeting the Prime Minister made two requests from Pelene Maha Nayaka Thera. One was to nominate a bhikkhu from the Amarapura Nikaya to discuss matters of the Sasana. Venerable Agga Maha Pandita Beruwala Sirinivasa Maha Nakaya Thera was nominated. The second was to submit two names to serve as members of the Buddha Sasana Commission which the Government was going to appoint to ensure the protection of the Buddha Sasana. The two nominees were Venerable Agga Maha Pandita Balangoda Ananda Maitriya Maha Nayaka Thera and myself.

The Buddha Sasana Commission toured the entire country and gathered a lot of information before proceeding to Myanmar, Thailand, Kampuchea and Laos to study the conditions in those countries. An exhaustive report was compiled. Meanwhile, we were informed that the Prime Minister Bandaranaike was leaving for the United States having received an invitation to address the United Nations and would have discussions in Britain on his journey back. After his return the findings of the Commission would be taken care of.